Maha Shivratri, the night of the worship of Shiva, falls on the Krishna Chathurdasi day, on the 14th night of the new moon during the dark half in the month of Megha or sometimes in Phalguna also.Shivratri ('ratri' = night) is the night when he is said to have performed the Tandava Nritya or the dance of primordial creation, preservation and destruction. In Kerala the month of Kumbham is noted for the Sivarathri festival which falls in February -March.It falls on a moonless February night, when Hindus offer special prayer to the lord of destruction.The festival is observed for one day and one night only. Shiva is known by many names like "Shankar", "Mahesh", "Bholenath", "Neelakanth", "Shambhu Kailasheshwar", "Umanath", "Nataraj" and others. 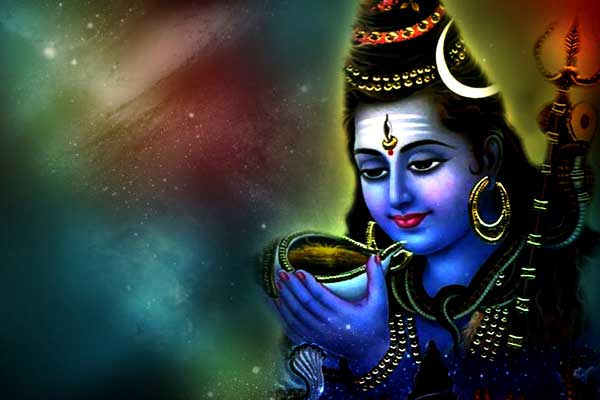 According to the Puranas, during the great mythical churning of the ocean called Samudra Manthan, a pot of poison emerged from the ocean. The gods and the demons were terrified as it could destroy the entire world. When they ran to Shiva for help, he in order to protect the world, drank the deadly poison but held it in his throat instead of swallowing it. This turned his throat blue, and since then he came to be known as Nilkantha, the blue-throated one. Shivratri celebrates this event by which Shiva saved the world.

On the day of Shivratri, a three-tiered platform is built around a fire. The topmost plank represents swargaloka (heaven), the middle one antarikshaloka (space) and the bottom one bhuloka (earth). Eleven urns or kalash, are kept on the swargaloka plank symbolizing the eleven manifestations of the Rudra Shiva. These are decorated with bilva (woodapple leaves) and mango leaves atop a coconut representing the head of Shiva. The uncut shank of the coconut symbolizes his tangled hair and the three spots on the fruit Shiva's three eyes.

According to the Shiva Purana, the Maha Shivratri worship must incorporate six items: the ceremonial offer of cooling bael leaves to the deity, representing purification of the soul; the vermilion paste applied on the linga after bathing it, representing virtue; food offering which is conducive to longevity and gratification of desires; incense, yielding wealth; the lighting of the lamp which is conducive to the attainment of knowledge; and betel leaves marking satisfaction with worldly pleasures.All through the day the devotees keep severe fast, chant the sacred Panchakshara mantra "Om Namah Shivaya", make offerings of flowers and incense to the Lord amidst ringing of temple bells. They maintain long vigils during the night, keeping awake to listen to stories, hymns and songs. The fast is broken only the next morning, after the nightlong worship.

The celebration of Sivarathri at the Siva temple at Aluva on the sand bank of River Periyar is attended with great eclat. Here the Lingom (idol) of Siva rises out of the sand on the bank of the river. The sand bank is extensive and the pilgrims running into several thousands congregate here. People belonging to all classes, castes and creeds assemble for this festival, some for worship, some for merchandise and some for sightseeing.There are rows of sheds built where merchants exhibit every kind of merchandise for sale. There are shows, dances etc. meant for keeping the pilgrims awake throughout the night. In addition to the observance of Shivratri rites, most of the pilgrims offer Bali (sacrifice) to their ancestors in the morning succeeding the holy night.