Onam is the most popular festival in Kerala celebrated by all Malayalis all around the world equally without distinction of religion or caste; with great pomp and show. It is believed to be the National festival of Kerala. Onam is celebrated each year in the month of August-September which according to the Malayalam calendar is the first month of the year called Chingam. The festivities of the Onam last for ten days in which old and young participate with equal enthusiasm. The festival is celebrated to commemorate King Mahabali, whose spirit is said to visit Kerala at the time of Onam. 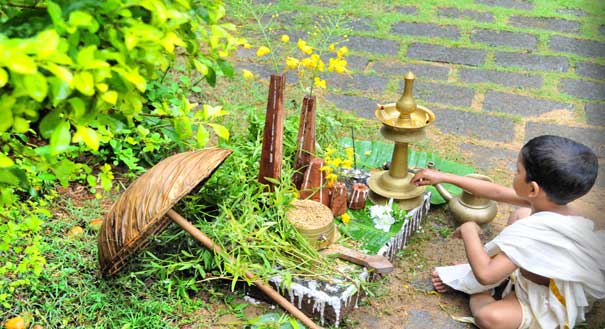 The word Onam is believed to have been originated from the Sanskrit word Shravanam which in Sanskrit refers to one of the 27 Nakshatras or constellations. Thiru in South India is used for anything associated with the Lord Vishnu and Thiruvonam is believed to be the Nakshatra of Lord Vishnu who pressed the great King Mahabali to the underworld with his foot.

The legend of Onam is that during the reign of the mighty asura (demon) king, Mahabali, Kerala witnessed its golden era. Everybody in the state was happy and prosperous and the king was highly regarded by his subjects. Apart from all his virtues, Mahabali was egoistic. This weakness in his character was utilized by Gods to bring an end to his reign as they felt challenged by Mahabali's growing popularity. However, for all the good deed done by Mahabali, God granted him a boon that he could annually visit his people with whom he was so attached. According to Vaishnavism mythology, the defeated Devas approached Vishnu for help in their battle with Mahabali.

Vishnu refused to join the gods in violence against Mahabali because Mahabali was a good ruler and his own devotee. He, instead, decided to test Mahabali's devotion at an opportune moment. Mahabali, after his victory over the gods, declared that he will perform Yajna (homa sacrifices) and grant anyone any request during the Yajna. Vishnu took the avatar of a dwarf boy called Vamana and approached Mahabali. The king offered anything to the boy – gold, cows, elephants, villages, food, whatever he wished. The boy said that one must not seek more than one needs, and all he needs is the property right over a piece of land that measures "three paces". Mahabali agreed.

The Vamana grew and covered everything Mahabali ruled over in just two paces. For the third pace, Mahabali offered himself, an act which Vishnu accepted as evidence of Mahabali's devotion. Vishnu granted him a boon, by which Mahabali could visit again, once every year, the lands and people he previously ruled. This revisit marks the festival of Onam, as a reminder of the virtuous rule and his humility in keeping his promise before Vishnu. 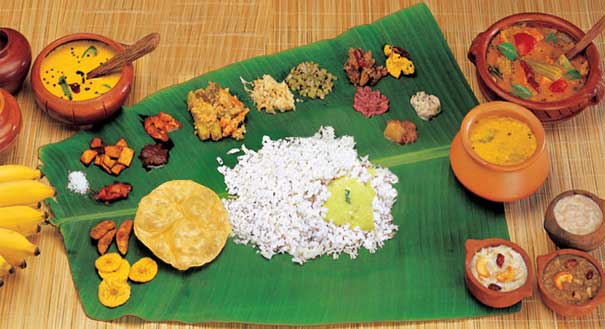 Onam Sadya is another very indispensable part of Thiruvonam, and almost every Keralite attempts to either make or attend one. The Onasadya reflects the spirit of the season and is traditionally made with seasonal vegetables such as yam, cucumber, ash gourd and so on. The feast is served on plantain leaves and consists of nine courses, but may include over two dozen dishes, including (but not limited to): Chips (especially Banana chips), Sharkaraveratti (Fried pieces of banana coated with jaggery), Pappadam, various vegetable and soups such as Injipulli, Thoran, Mezhukupuratti, Kaalan, Olan, Avial, Sambhar, Dal served along with a small quantity of ghee, Erisheri, Molosyam, Rasam, Puliseri (also referred to as Velutha curry), Kichadi and Pachadi (its sweet variant), Moru (Curd with water), Pickles both sweet and sour, buttermilk, coconut chutney. The feast ends with a series of the dessert called Payasam (a sweet dish made of milk, sugar, jaggery, and other traditional Indian savories) eaten either straight or mixed with a ripe small plantain. The curries are served with rice, usually, the 'Kerala Matta' parboiled rice preferred in Kerala.

In hotels and temples, the number of curries and dishes may go up to 30. The importance of the feast to Kerala's Onam celebration culture is captured in the famous Malayalam proverb "Kaanam Vittum Onam Unnanam " which means "One must have the Onam lunch even selling his property, to have so". The Travancore-style Onasadya is renowned to be the most disciplined and tradition-bound.

This refers to all the games played at the festival of Onam. Talappanthukali which is game played with a ball is a favorite of men. They also indulge in Ambeyyal (archery). Women engage themselves in making Pookalam and performing several traditional dances.

Also known as the snake boat race, this is one of the most entertaining events of the Onam festival. Near about 100 boatmen compete with each other in a boat riding competition Well-known races include the Aeanmulla UthrattadhiBoat Race and the Nehru Trophy Boat Race. Numerous oarsmen row huge snake-shaped boats. Men and women come from far and near to watch and cheer the snake boat race through the water. This event is particularly featured on the Pampa River, considered sacred and Kerala equivalent of Ganges River. The boats are decorated beautifully in different patterns. Men and women from across the city come to witness this race. 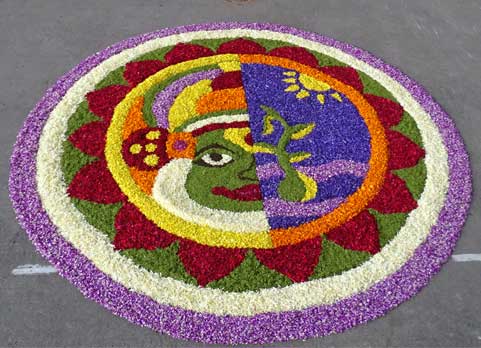 Pookkalam refers to making designs with different types of flowers in front of the gate of the house. With each passing day during the Onam festival, a new layer of flowers is added to the Pookalam. At some Pookalam competitions are held at some places.

The Onam celebrations across the state start off with a grand procession at Thrippunithura near Kochi called Atthachamayam, also referred to as Thripunithura Athachamayam. The parade features elephants marching, drum beats and other music, folk art forms, floats and colorfully dressed people with masks. In Kerala's history, the King of Kochi used to head a grand military procession in full ceremonial robes from his palace to the Thrikkakara temple, meeting and greeting his people. In contemporary times, this a state-supported event.

The parade floats traditionally feature scenes from epics such as the Mahabharata and the Ramayana. Additionally, some floats include themes from the Bible as well as current themes thereby highlighting unity and harmony.

The procession path historically has been from Tripunithura to the Vamanamoorthy Temple in Thrikkakara, Ernakulam district. The temple is dedicated to Vishnu in his Vamana (dwarf) avatar. After arrival at the temple, the marchers offer a prayer.

Other major attraction of the festival includes the thumbithullal (folk dances) performed by women. Kaikottikali is a clap dance performed on the occasion of Onam. Women performing the dance sing praises of King Mahabali. Women also perform a dance in a circle. This dance form is called Thumbi Thullal.