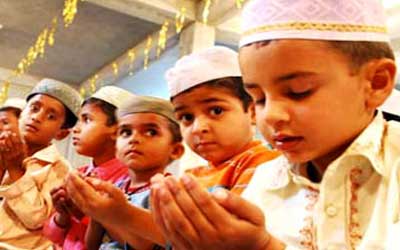 Miladi Sharif or barah wafat, the Birthday celebration of Prophet Mohammed, is a major Muslim festival in Kerala which falls on the 20th of April.

The Prophet was born on the twelfth day of Rabi-ul-Awwal, the third month of the Muslim year. His death anniversary also falls on the same day, the word 'barah' standing for the twelve days of the Prophet's sickness.

Reading what is commonly known as the 'Maulod' which is a short biography of the Prophet written both in verse and prose in the Arabic language has been the common ritual of the day.The celebration of the Miladi Sherif in certain parts of the State, for instance, Ponnani, is marked by busy activity connected with the large-scale feeding of the poor. Here in the Muslim Centre, one finds that the town is active during the whole night busily engaged in the charitable work of supplying food to the poor.

Recently Miladi Sherif celebration has assumed greater importance in Kerala. Colorful processions are also held through the towns reciting Thakbir which finally converge on some central place where public meetings are held. These public gatherings are addressed by well-known speakers who deal with the various aspects of the Prophet's life.