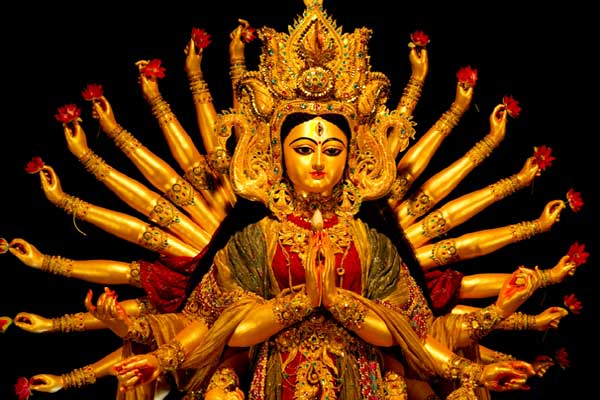 Navaratri is one of the greatest Hindu festivals. It symbolizes the triumph of good over evil. Navaratri takes place at the beginning of October around harvest time.

During this period, Durga, Lakshmi and Saraswati are worshipped as three different manifestations of Shakti, or cosmic energy.

Hinduism is the only religion in the world which has emphasised to such an extent the motherhood of God.Nava-ratri" literally means "nine nights." This festival is observed twice a year, once in the beginning of summer and again at the onset of winter.During Navaratri, we invoke the energy aspect of God in the form of the universal mother, commonly referred to as "Durga," which literally means the remover of miseries of life.

She is also referred to as "Devi" (goddess) or "Shakti" (energy or power). It is this energy, which helps God to proceed with the work of creation, preservation and destruction. In other words, you can say that God is motionless, absolutely changeless, and the Divine Mother Durga, does everything. Truly speaking, our worship of Shakti re-confirms the scientific theory that energy is imperishable. It cannot be created or destroyed. It is always there.

Navaratri is divided into sets of three days to adore different aspects of the supreme goddess. On the first three days, the Mother is invoked as powerful force called Durga in order to destroy all our impurities, vices and defects.

The next three days, the Mother is adored as a giver of spiritual wealth, Lakshmi, who is considered to have the power of bestowing on her devotees the inexhaustible wealth.

The final set of three days is spent in worshipping the mother as the goddess of wisdom, Saraswati. In order have all-round success in life, we need the blessings of all three aspects of the divine mother; hence, the worship for nine nights.

The last three days of the Navaratri are called Durgashtami, Mahanavami and Vijayadasami, and they are considered more sacred than the other days for Devi worship. 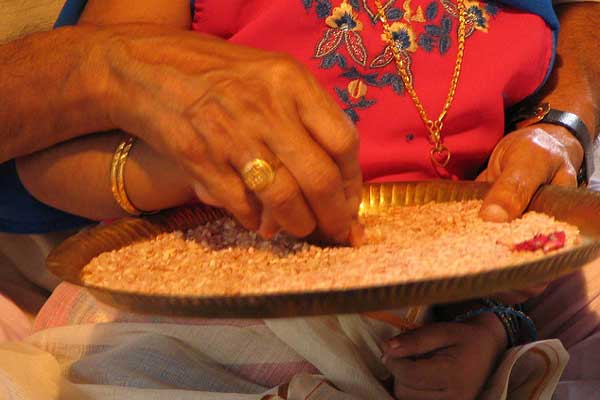 People of Kerala celebrate Navaratri in a befitting manner. The Saraswati puja and Ayudha Puja are performed.On the Durgashtami day a ceremony called Poojavaipu is performed in the evening .Just before the Poojavaipu, all studies and work which mainly require skill, are suspended.

Then a Puja is performed to Saraswati during which fruits, beaten rice, roasted paddy (malar), jaggery etc, are offered to Her. The following day is known as Mahanavami and it is totally devoted to the worship of Saraswati Pooja is performed both in the morning and in the evening.On the Vijayadasami day after a Puja in the morning, the Books and implements are removed from the room and this ceremony is called `Puja Eduppu'.

The time for the break up of the puja marks the beginning of learning and work.At this auspicious moment the children for the first time are given instructions to write the first fe w alphabets on rice or sand. They are thus initiated into the world of knowledge. This is called `Ezhuthinu Iruthu' or 'Vidyarambham' and according to custom only after this ceremony child becomes entitled to write or read.

There are certain communities which celebrate the festival on all days of Navaratri Images of Gods, animals and toys of different variety are arranged for exhibition and this performance is called `Koluvaipu'.