Planting and after care 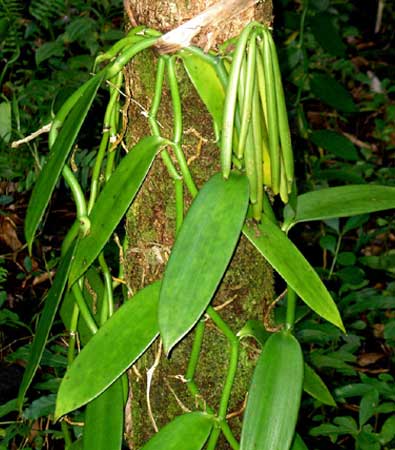 Vanilla can be raised either as Monocrop or intercrop in coconut and arecanut gardens. It is usually trained on trellises or on low branching, rough-barked trees like Glyricidia Maculata, Plumeria alba, jack (Artocarpus heterophyllus), Erythrina spp., etc. or on dead standards. In some places, arecanut is also used for trailing vanilla. The standards have to be planted well in advance at a spacing of 1.2-1.5 m within rows and 2.5-3.0 m between rows. Approximately 1600 to 2000 standards can be accommodated in a hectare. If dead standards are used, the shade should be provided to the vines initially by planting banana or suitable plants. The vanilla plants should be allowed to trail horizontally on poles/trellises tied to trees after trailing to a height of 1.5- 2.0 m or coiled around the branches so as to facilitate pollination and harvesting. Flowering will not occur as long as the vines climb upward. The shade trees should be regularly pruned to maintain a light shade. The pruned leaves and branches can be applied as much.

Planting of cuttings should be taken up preferably during September-November in shallow pits, filled with hummus and mulch. The cuttings should be planted with two nodes below the soil surface and at the rate of two cuttings per standard. Care should be taken to ensure that the basal cut end of the cutting is kept just above the surface of the soil to prevent rotting. It is advisable to provide adequate shade to the newly planted cuttings. A thick mulch of leaves should be provided immediately after planting. The cuttings sprout within 4-8 weeks.

Inter-cultivation is not generally recommended in vanilla plantations. However, occasional slashing of weeds is beneficial. Care should be taken not to disturb or damage the roots during cultural operations since they are mainly confined to the surface layer of the soil. Regular mulching combined with irrigation during summer enhances growth and yield.

Manuring
The quantity of fertilizers to be applied may vary based on the fertility status of the soil. However, 40-60 g of N, 20-30 g of P2O5 and 60- 100 g of K2O should be given to each vine per year besides organic manures such as vermicompost, oil cakes, poultry manure, wood ash, etc. Organic manures can be applied during May-June and NPK in 2-3 splits along with leaf mulch during June-September on the topmost layer of the soil when sufficient moisture is available. As in the case of other orchids, vanilla also responds to foliar feeding. A 1% solution of 17:17:17 NPK mixture can be sprayed on the plant once a month for boosting growth and flower production.

Flowering and pollination
Vanilla usually starts flowering in the third year of planting; however, it depends on the size of the original cutting used for planting. Maximum production of flowers occurs during the 7-8th year. Vanilla flowers during December to February and each flower lasts for only a day. Pinching off the top 7.5 to 10.0 cm of the vine, 6-8 months before the flowering season encourages flower production. Similarly, pruning off the older branches (which bore fruits the previous year) also encourages flower production. The flowers are borne in axillary racemes and each inflorescence consists of 15-20 flowers. The flowers are to be artificially pollinated (hand pollination) for fruit set. Since the flowers last only for a day pollination must be done on the same day. The remaining flower buds are nipped off. About 10-12 inflorescences may be pollinated in a vine. In hand pollination method, a pin or needle or small piece of pointed wood or a toothpick is ideal to apply pollen on the stigma of the flower. The pollen of the vanilla flower is produced in a mass called pollinia and is covered by a hood or another cap. The stigma is protected with a lip known as ërostellumí or ëlabellumí. For pollination, the stamen cap is removed by a needle exposing the pollinia. Then the flap-like rostellum is pushed up and the pollinia are brought into contact with the stigma. The ideal time for pollination is 6 am to 1 pm. An efficient worker can pollinate 100-150 flowers a day.