Among the various Hindu festivals in Kerala, Vishu occupies a unique position in more than one respect. This day is celebrated in almost all places in India by the Hindus albeit by different names. In Bihar, this day is called Bihu, in Punjab Baisakhi and in Tamil Nadu Puthandu. Though this is not the New Year's Day in the Malayalam Calendar, people of Kerala consider Vishu the beginning of a new year. This occasion signifies the Sun's transit to the zodiac Mesha Mesha Raasi as per Indian astrological calculations. 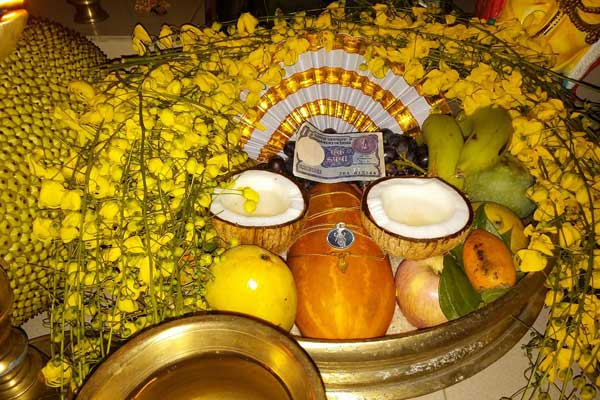 is believe that the fortunes for the year depend upon the nature of the object one sees first in the morning of Vishu Day. In order to fulfill the desire to look at the auspicious articles, they prepare a 'Kani' (anon) on the previous day for seeing in the next morning. In circular bell-metal vessel known as 'Urule' some raw rice is put and over it, a folded newly washed cloth is spread. In it, a cucumber, betel leaves, and nuts, metal mirror, yellow flowers of Konna tree (Cassia fistula), a Grandha (book of palm leaves) and a few gold coins are then placed in a decorative fashion. Two coconut halves containing oil and lighted wicks are also placed in the vessel which illuminates the articles inside it. A bell-metal lamp filled with coconut oil is kept burning by the side of the vessel.

Early morning the eldest female member gets up and lights the lamp and looks at'Kani'. She wakes up the other members, and the Kani is shown to every one of them, taking particular care not to allow anyone to look at other things even by chance. The vessel is taken to the bedside to the members or if it is too big to be carried, it is placed at one spot and the members are led there blind-folded. Even the cattle are not deprived of this privilege, as the Kani is taken to the cattle-shed and placed before them to have a look.The families then celebrate the day with joyous abandon by bursting firecrackers after the Vishu Kani. While the men and the children engage in bursting crackers, the women start cooking a variety of delicacies for the day's lunch. The feast or the 'sadya' is prepared by the women of the household and the whole family sits down to enjoy the Vishu lunch together.

Vishu is also a day of feasting, wherein the edibles consist of roughly equal proportions of salty, sweet, sour and bitter items. Feast items include 'Veppampoorasam' (a bitter preparation of neem) and 'Mampazhapachadi' (a sour mango soup).The dishes prepared from the vegetables and fruits that are abundant in the season like jackfruits, mangoes, pumpkins, a variety of gourds, and coconuts. The famous temples like Guruvayur, Sabarimala and Padmanaba Kshetram are filled with devotees. Special pujas are held in these temples where the people go to worship and pray for a prosperous New Year. They also view the Vishukanis that are prepared in each of these temples.