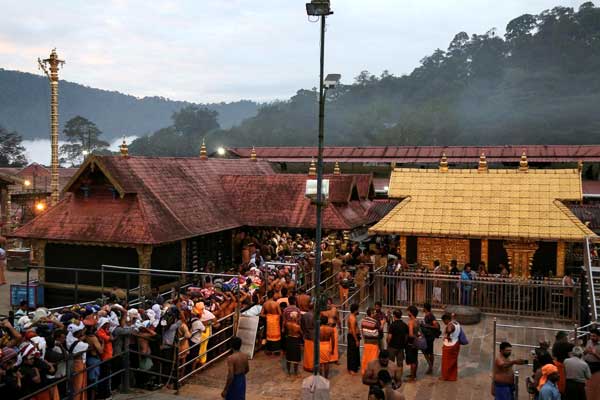 The shrine teems with devotees especially during the main pilgrim season from November to January. Mandalapooja and Makaravilakku are the two main events of the pilgrim season.
The temple stays closed during the rest of the year except for the first five days of every Malayalam month and during Vishu (April).

A pilgrim attending the Mandalapooja should observe austerities for 41 days. During this period, the pilgrim should abstain himself from non- vegetarian habits and cardinal pleasures.

A flashback:
For many centuries Sabarimala in the south has been an important pilgrim center attracting lakhs of devotees from all over India, especially from the southern states.

The presiding deity at Sabarimala is Lord Ayyappa known as Dharma Sastha, who is considered a symbol of unity between the Vaishnavites and Saivites, his origin being traced to a union of Siva and Vishnu under special circumstances.

He is also believed to have fulfilled his mission in life and rejoined his Supreme Self enshrined at Sabarimala. Some scholars say that Sastha images seen all over Kerala are those of Lord Buddha, but there are others who dispute this theory.

The temple is situated in the interior of the mountain ranges of the Western Ghats Sahyadri, and it is inaccessible except on foot. Pilgrimage to Sabarimala cannot be undertaken at all seasons, because it requires long preparation and fixed timings.

A devotee who wishes to perform the pilgrimage should undergo forty-one days' Vritham' (penance) consisting of strict celibacy, morning and evening ablutions, growing of beard and daily prayers. Saranamvili or the call of dedication and refuge in Lord Ayyappa is an essential part of the daily worship. 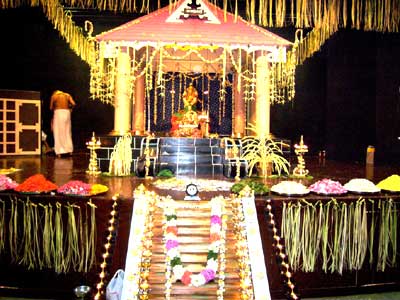 January 14, every year synchronizing with the day of Sankramom (crossing of the sun from Dhakshinayana to Uttarayana) is the most important festival day of the temple. On the above day, lakhs of pilgrim each called an Ayyappa (assuming the very name of the Lord) flock to the shrine for worship. Here they see the Makara Vilakku the appearance of a spontaneous phenomenon of strange light in the distance, indicating the presence of God, and return ennobled and strengthened in spirit.

Situated not far from the Sabarimala temple, there is a shrine in the name of Vavar, a Muslim of great valour, who was thought to be a close associate of Sri Ayyappa. It is a rare feature of the pilgrimage to Sabarimala that the Hindu pilgrim offers worship at this shrine of Vavar also during their trip, indicating the communal harmony that prevailed in Kerala for ages. During the entire pilgrimage, all distinctions of caste and class are forgotten.

To reach
The easiest route is via Chalakkayam, by which one can reach the banks of the river Pamba by vehicle. Pamba is the main halting point on the way to Sabarimala. From here one has to trek 4 to 5 km to reach the temple.
for more details log on to sabrimala.org