Welcome to The Cultural Capital of Kerala - Thrissur! 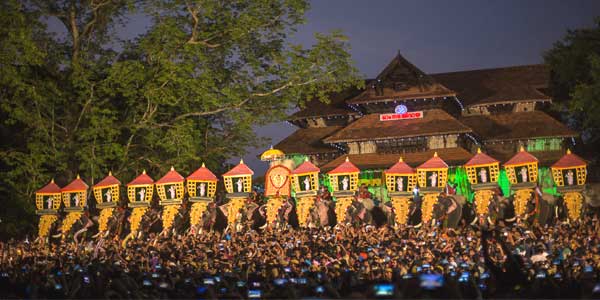 Thrissur is a district situated in the central part of Kerala state with its headquarters at Thrissur City. Thrissur district was formed on July 1, 1949. The city having a population of approximately 3.2 lakhs and an area of about 66.15 sq.km, has witnessed many a cultural and political turmoil.

Thrissur is known as the cultural hub of Kerala. It has a large number of historic temples such as Thiruvambady temple, Vadakkumnatha temple and Paramekkavu temple, and two well-known churches, the Our Lady of Lourdes Metropolitan Cathedral and the Our Lady of Dolours " New Church " Basilica (the biggest in South Asia ).

Thrissur Pooram, a colorful and spectacular religious festival in South India and known as “mother of all Poorams” draws thousands of people from all over the world. Some other famous temples include world-famous Guruvayur Sreekrishna Temple, Thriprayar Sreerama Temple, Kodungalloor Bhagavathi Temple, Irinjalakuda Koodalmanikkyam Bharatha Temple, Thiruvilwamala Villuadrinatha Temple, and Thrissur Vadakkumnatha Temple....More....