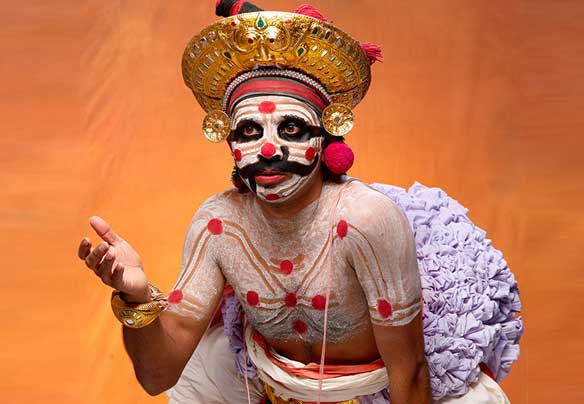 Chakyar is one among the many upper cast Hindus, dependant on the temple, living by the sacrament food and meagre salary from the temple, adept in telling stories from the legends in a humorous and enchanting manner.

The term Koothu literally means dance which may be taken as an index of the importance attached to dance in the original form of the art. In Chakkiarkoothu, the story is recited in a quasi-dramatic style with emphasis on eloquent declarations with appropriately suggestive facial expressions and hand gestures.

It is one of the oldest of theatrical arts peculiar to Kerala. As a matter of fact, the movements and facial expressions and the signs and gestures employed by the actor in Koothu are said to approximate most closely to the principles laid down in the authoritative Sanskrit treatise on the subject, Bharatha's Natya Sastra. Attired in a gilt bordered cloth, wearing a red cap and ornaments on the neck, ear and hands, he recites the scriptural poem and annotations with witty and humorous examples and anecdotes with the accompaniment of the cymbals and another cast Hindu Nambiar drumming the Mizhavu, made of copper with a narrow mouth on which is stretched a piece of parchment (a percussion instrument made of covering an narrow-mouthed big earthen jar with deerskin).

He is licensed to tease and cut jokes on anyone among the audience, even the mighty ruler, during the discourse exploiting the legendary situations as all those are permitted as the prerogatives of the Chakyar. One should know Malayalam to enjoy the congenital jokes.