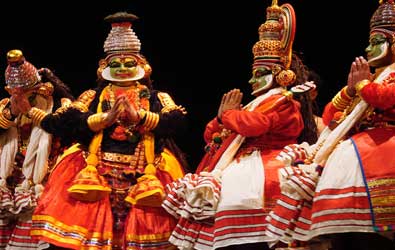 This is another form of dance drama, enacted in Guruvayoor Temple, depicting the frolics and divinity of Lord Krishna. The Sree Krishna Temple of Guruvayoor was absolutely owned and maintained by the Zamourin of Kozhikode till the end of their empire conquered by the British.

One of the Zamourins, King Manavedan, contemporary of Saint Vilwamangalam, a scholar and poet, was an ardent devotee of Guruvayoor deity. He used to find the time, even amidst the tight schedules of governance, to spend a few days in devotion within the precincts of the temple. Saint Vilwamangalam was very much in the temple and, it was known to all that he was frequented by the sight of Sree Krishna alive.

Zamourin pestered the Saint with a queer request to show him also the lord live during one of His secretive appearance to him. Once, while walking out of the temple towards the 'Manjulal', the Banyan tree named after a virgin devotee unified with the Lord, both of them came across few children playing in the shade of it.

Vilwamangalam looked delighted and told, "Lord, quick, look at these children touching my body". Lo! It was a blissful sight of a lifetime for the King. He saw Krishna as a lad squatting on the floor frolicking and playing with other children.

The King could not believe his eyes for a second. He lost control of himself, in a sudden leap, jumped to the midst of the children and in a whiff, embraced Krishna. The Lord Himself taken aback, chastised him saying, "tut, tut, Vilwamangalam did not seek permission from me for this" and wriggled Himself out of his caged arms. In the melee, the King managed to pick a peacock quill that the Lord had adorned his tuft with. The King regarded this as a rare divine gift and made a crown in gold to tuck quill on. 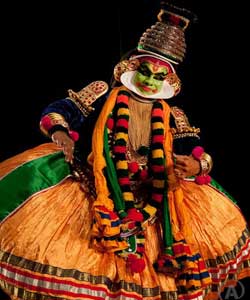 By the frenzy caused of divine touch, the King wrote a drama on Krishna and premiered it in Guruvayoor Temple. The actor who played the role of Krishna was adorned with peacock quill crown. The legend is that the actor, the moment he wore the crown, slipped into a godly mood and acted in a superhuman manner making the play unexpectedly successful. Lord Krishna, Himself invested in him.

The Krishnattam troupe was once invited to perform in the Tripunithura temple. While the show was on, certain mischievous characters brought a tusker in front of the stage. On seeing it, actor characterizing Krishna became angry and jumped down the stage, reached the animal and caught hold of it by its two tusks. The scene became tense. Elders and King himself intervened and pacified him, else it would have been a fierce incident. The legend still continues. The artists wear the costumes and ornaments in a similar fashion as that of Kathakali with the conspicuous difference only in the language and rhythmic pattern of the song written in chaste Sanskrit.

The story of Sree Krishna, from incarnation to ascension, as narrated from the tenth chapter of Mahabharatham, is the theme of this drama staged in the Koothambalam (Temple dance stage) of Guruvayoor temple for eight nights till dawn.