A Puppet Show With a Difference 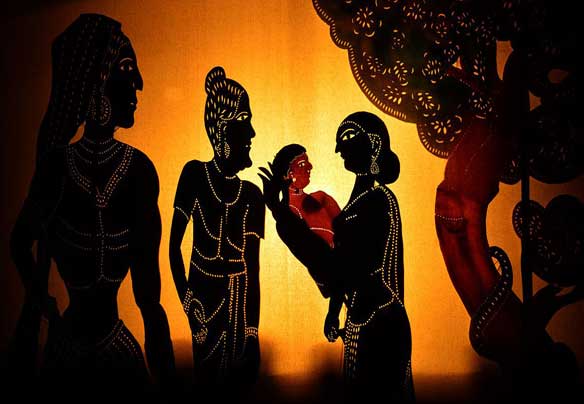 Thol Pava Koothu is an ancient form of art in Kerala Temples (THOL = Leather; PAVA = PUPPET or DOLL; KOOTHU = SHOW). This show is conducted as a ritual in the Bhagavathy temples of Malabar for centuries. This play with shadows reminds of the old black and white films.

The animal leather is cleaned, dried, flat and cut in the shape of story characters, Human, Bovine or Aquatic. Being a shadow play, suitable holes are made for light effect from behind. Stories from Hindu Epic like Ramayana are played in this. According to Hindu mythology, this show was designed by Lord Shiva to please goddess Badrakali. The latter was engaged in a battle with demon Darika during the time of RAMA RAVANA battle and felt sorry for not being able to witness the great battle. Lord Shiva redressed her grievance by showing the Rama-Ravana battle through Thol Pava Koothu.

A white cloth about 20 feet long is fixed tightly without wrinkles as the screen. Below this, a black cloth about 40 feet is also fitted tightly. This is done in the special stage made for the show called KOOTHU MADAM. Specific dimensions are there for all these. The white cloth depicts Earth and Heaven and the black PATHALAM the abode of Demons.

An areca nut tree log is fixed horizontally in the required height behind the white screen. Depression is made in this log where coconut broken pieces with oil and cloth wicks are kept ready to be lightened. Several religious rites are there to start the show. The KOMARAM of the temple who is supposed to represent the goddess of the temple blesses the site of the show and gives an order to start the show. The artist offers prayers to God and lights the lamps behind the screen.

The artist who is an experienced master sings the story in the show with drum beats. He moves the leather made PAVAS in the required action and the shadow in the screen moves like performing artists. The viewers enjoy the drama in the shadows of the puppets. Though this was confined to temples and epics, efforts are on to show modern episodes and stories of great men. A story of our father of the nation Mahathmaji is getting ready says a report.

Puppet shows similar to Thol Pava Koothu of Kerala are there in Czechoslovakia, Sicily and Japan. Probably there may be differences but they are contemporaries.