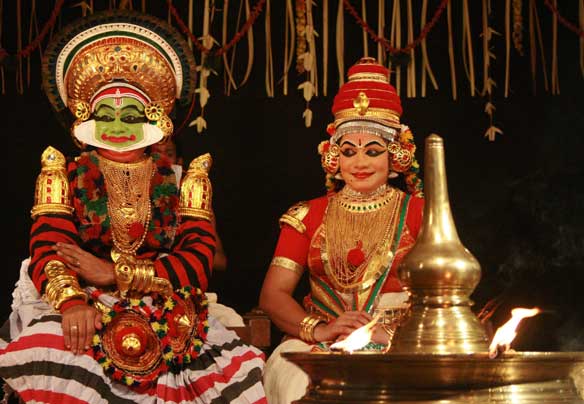 The literal meaning of the title being concomitant dancing, it is another temple opera performed jointly by Chakyars and Nambiars. A dance traditionally enacted in temples. it is Kathakali's 2000 year old predecessor and is offered as a votive offering to the deity. Both men and women partake in this performance. Abhinaya is the most important element in Koodiyattom.

The texts are always in Sanskrit and the performance is a prolonged affair. All the four types of abhinaya, viz. Angikam, Vachikam, Sathvikam and Aharyam are fully utilized in Koodiyattom. The plays are performed only in temple precincts as votive offerings. Abhinaya or acting is a three -fold or even four-fold process. Appropriate hand gestures are symbols are first shown when the words of the verse are spoken in a typically modulated tone. As the music is begun, the meaning of the words are translated into a language of bodily postures, attitudes and facial expressions. The third is a repetition of the first.

Koodiyattom is staged on the specially built temple theatre called Koothambalam. The stage is decorated with fruit-bearing plantains and bunches of tender coconuts and festooned with fronds of the coconut palm. A vessel overflowing with paddy is placed on the stage. Lighting is done with a tall oil lamp made of brass. Within a railed enclosure on the stage is a large copper drum called mizhavu with a high seat for the Nambiyar drummer.

A Nambiyar woman plays the cymbal and occasionally recites the verses. At times special orchestral effects are introduced. The orchestra consists of an edakka, maddalam, a conch, pipe and horn. There is facial make-up using colour schemes and a pattern having symbolic value, though strict standardization of types is absent. The make-up patterns as seen in the better-known Kathakali are borrowed from Koodiyattom.

In the actual performance, first the drum is sounded and then the Nambiyar woman recites the invocatory verse, (Vandana slokam). After that, a purificatory ritual of sprinkling holy water on the stage is done by the Nambiyar. Then there is an interlude of an orchestra, after which the dance ritual ceremony called Kriyachavittuka is performed by the Sutradhara.

The next item is the stapana of the particular act. The main character is introduced in the next stage called Koothupurappadu in the background of the tense dramatic sense created by the full orchestra fury. Nirvahana, the next part of the drama, follows. This itself consists of three phases, the Anukrama, the Samkshepa and the Vistara respectively. Purushartha follows in which clown (Vidushaka), caricaturing the moods, is the hero. This is a significant departure from tradition and a remarkable feature of Koodiyattom. The drama proper now begins sluggishly and leisurely through the long drawn out, detailed and elaborate abhinaya process.