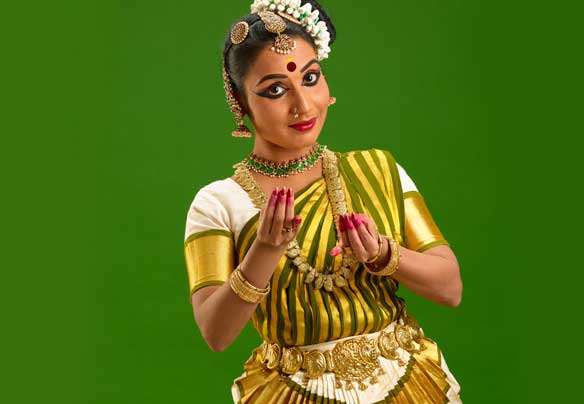 It is the typical dance form of Kerala. Mohini means enchantress and attam is dance. As the name denotes, it is an amorous (Lasya) dance performed in slow, elegant and sensuous pace with formulated hand gestures translating the song to which it is performed. It is closely related to Bharatanatyam of Tamil Nadu, which was originally called 'Dasiyattam'. Originated as the temple dance performed by Devadasis, it portrays feminine love in its myriad forms - carnal, devotional and maternal- with an accent more on Lasya and Bhava.

Mohiniyattam is said to have originated in Kerala. It is an art form of Travancore of nineteenth-century enlivened during the regime of King Swati Thirunal. The king, a scholar, Sanskrit poet and an exponent of Carnatic and Hindustani music, patronized and popularised this art form with whole-hearted co-operation and lyrical support from Irayimman Thampi, a noted poet, often referred to as gem of his court.

Most of the component items of Mohiniyattam are similar to Bharatnatyam and Kuchipudi, though subtle differences of style are obvious. The language used in the lyrics is a pleasant mixture of Malayalam and Sanskrit, known as Manipravalam. Formerly, the Padams were specially composed to include only Sringararasa. Nowadays artists are using any classical or semi-classical compositions, even from other languages.

Among the main items Cholkettu, Padavarnam and Padam, Mudras and facial expressions are more important than the rhythmic steps. The tuft knotted at the side of the head adorned by a garland of jasmine circling it, the dancer with normal facial makeup and clad in a gilded sari with series of pleats and jacket sways her body to the rhythm of orchestrated background music. Compared to most other dance forms, Mohiniyattam gives more importance to gestural and facial acting. The Mudras (hand gestures) are almost always the same as those employed in Kathakali. The artists try to enact the lyrics almost in its entirety, like in Kathakali.