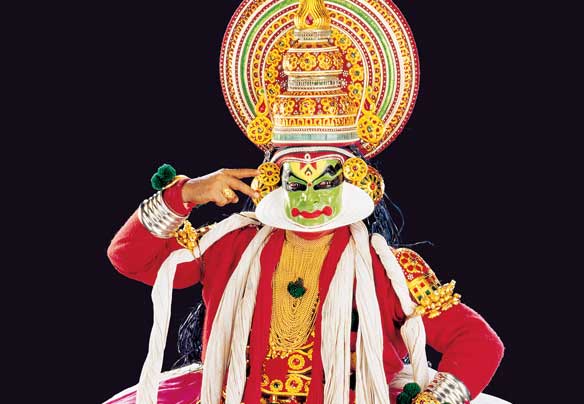 Kerala is known the world over by its own performing art form, the Kathakali. "Katha" means story and "Kali" stands for dance. It is a beautiful mix of dance, drama and music that the connoisseurs of art world qualified as 'a total art form of immense sophistication and power'.This is a form of dance formerly confined only to the festival stages in temples.

It is a mime show, dancing with mudras (formulated hand gestures conveying the text of lyrics) and specialised dancing steps following the song rendered in the background by a singer to the accompaniment of Chenda, Maddalam (country drums), Chenkila and Elathalam (Cymbals). The face painted green and made up with a spot of sacred sandal paste on the brow, eye-lined with mascara, lip toned by cherry and white chin mask, the dancer dons a colorful costume and rich and impressive crown and jewellery.

A traditional pedestal Nilavilakku (oil lamp) with sixty wicks on both sides lit together lights the dancing floor. There are four types of makeup. Pachcha (green) face painted green and adorning sober and beautiful attires denoting the godly or virtuous character.

There is a school of thought which believes that Ramanattam could be the ancestor of Kathakali, for very many similarities in the presentations, costumes, acting and background music could be cited in both. The stage decor, costumes, make up, and mudras, as seen today, are purported to be improvements bestowed gradually to this art form by two veteran Namboothiris, Kalladikkodan and Kaplingadan Manas.

Centuries down, there developed a branch of literature known as "Kathakali literature" and compositions of poet laureates like Kottayam Thampuran, Unnayi Warrier, Koyithampuran, Vayaskara Moss are milestones in the history of Kathakali.

Aattakkadhakal (stories for dance), the poetic compositions of legendary stories to special metric scale, set to music in classical Carnatic style are danced out.