The classical Indian dance form originated when ‘Atreya’ and other ancient sages put five questions to ‘Bharata Muni’ about ‘Bharata’.
1] How the Natyaveda came into existence.
2] For Whose benefit.
3] What are its Angas.
4] What are the means for arriving at definite conclusions.
5] How is it to be represented on the stage. 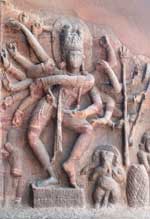 To begin with, Baharata introduced the ‘Natya’ incorporating only the three Vrttis, viz Bharati, Sattvati & Arabhati and presented it before God Brahma. The God told him to make use of Kaisikivrtti also which needs the assistance of women. For this, the celestial nymphs called ‘Apsaras’ were created.

The first performance was slated for the occasion of the Dhvajatsava, the festival honouring God Indiara. The theme of the show was the victory of good over the evils. Brahma set forth new ideas which should be acceptable to all and theme provide Virtue, fame, longevity and good advice to the world. But the first item on the agenda should be worship of the stage, without which no performance should be initiated.

Theatres are of three kinds. 1] Vikrsta [rectangular], 2] Caturassa [Square], 3] Tryasra [Triangular]. The laying of the foundation stone should be to the accompaniment of musical instruments. Erection of walls and columns should be according to the measurements. The theatre should have the appearance of a mountain cave; pictures should be drawn on the walls and seats should be made of bricks or wood to accommodate the Spectators or audiences.

Once the theatre is got up almost all major and minors deities are to be worshipped. Since they are supposed to be present on the stage protecting different sections.  The Sutradhare[Programmer] is to pray to these deities to afford protection during the night in which the performance is made.

‘Brahma’ ordained to Bharata to produce the type of play called Samavakara [in which there are twelve heroes and the sentiment of heroic as the predominant one]. Brahma had already composed Amrtamathana dealing with the churning of the milky ocean in which both Gods [are on the good side] and Asuras [are on the evil side] took part. Naturally, all of them were pleased and they forgot their enmity for a while. 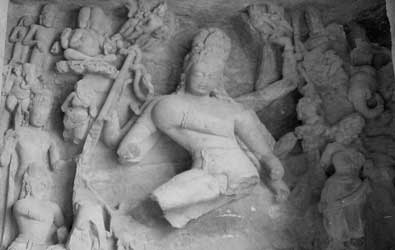 In these performances, the elements of representation like Angaharas [movements of limbs], Karanas [Postures] and Recakas [Gestures] were made use of. There are thirty-two Angaharas, Hundred- eight Karanas and four Recakas.

Karana-: The word Karana originated from the Sanskrit word’Krn’ means to act. According to Bharata a Karana consist of a combination of three elements viz-: Sthana- a posture of the body, Nrttahasta-: A hand pose and a ‘Kara’-: the movement of the feet.  Hence Karana is a movement and unit form of dance. In ‘Natyasastra’ there are 108 such karanas are describe. The Nrtta or dance based on Karanas can be classified as Laghu- Flowing gracefully, Visama- complicated and acrobatic and Vikata- hilarious. The Karanas are used according to the characterization taking into account the in-evitable psych- physic relationship. The Karanas are meant for Vakyartha- Bhinaya via to bring out the mood or meaning of the whole sentence through physical action.

After describing the gaits of the various human characters those of various birds, animals like lions etc are dealt with the movements of different vehicles like chariots, ascending of palaces and mounts, descents into rivers and lower places, riding of horses, movements of serpents etc are described here.

In addition to Sanskrit, Various dialects of Prakrits are to be used according to the nature of the character. This is followed by the different langaugae groups, which are of four kinds. 1] Atibhasa[For the Gods], 2] Aryabhasa[ Kings and nobles], 3] Jatibhasa[Different communities], 4] Yonyantaribhasa[ Sound of birds and animals].

An instrument is of four kinds. 1]Tata [Stringed ones like lute], 2] Avanaddha [on which a hide is spread as in the case of a drum]  3] Ghan[Salid like cymbals]  4] Susira[Hollow like a flute]. Since the music is generally pleasing in which Svaras and Talas combine.

Natyasastra is the mother of all classical Indian art form and lays down the foundations of a theory and practice of Indian arts, which was adhered, by all theoreticians and practitioners for a period of approximately two thousand years. Based on the Natyasastra of Bharata Muni, India has produced numerous art forms, such as Bharatanatyam, Kathakali, Kathak, Kuchipudi, Manipuri, Mohiniattam, Krisshnanattam etc.