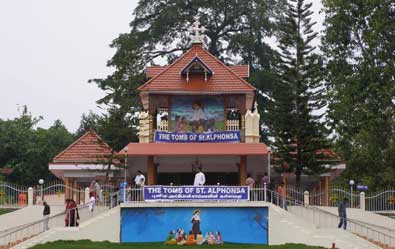 This is one of the important pilgrim centers of the Christians in Kerala. The mortal remains of Sister Alphonsa (1916-46), who was pronounced as blessed is kept in St. Mary's Church here. This 1000 yrs old church features an attractive grotto of Virgin Mary.

It is believed that this is one of the five temples where the original Vishnu image worshipped by the Pandavas is kept. 'The Deepam" festival is celebrated here with great joy in the month of November or December.

12 km north of Kottayam, is the ancient Shiva Temple, which attracts many devotees. There are exquisite mural paintings and sculptures inside the temple. The Ramayana scenes from Santhana Gopala Krishna Leela and Bhagavatham are beautifully carved around the shrine. The state Archaeological dept. has opened a mural art center near the temple. The annual festival of the temple is held in February or March and it lasts for 10 days. 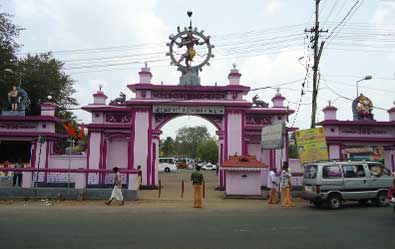 This is a famous temple in Ettumanoor, which is 12 km north of Kottayam town. It is well known for its murals, especially the painting of Nataraja in the Gopuram and Ezharaponnana (71/2 elephants finished in gold). The temple festival, Ezharaponnana utsavam is in February or March.

An important Syrian Christian Centre, the town of Mannanam, 8kms from Kottayam, sites the St. Joseph Monastery, associated with the name of Fr. Kuriakose Elias of Chavara (1805-71), one of the saintly figures of the Syrian Catholic Church of Kerala. Among renowned institutions here is the St. Joseph Press, which was established in 844. This is one of the oldest printing presses in Kerala. It printed the Nasrani Deepika, one of Kerala's oldest newspapers. 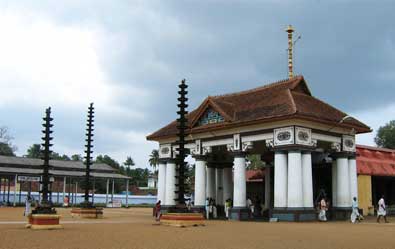 Situated in Vaikom, 40 km from Kottayam, this temple is dedicated to Lord Shiva. This temple is very famous for its typical Kerala style of temple architecture and is believed to have been constructed by Parasurama, the mythological creator of Kerala. The 12 days 'Ashtami' festival is celebrated here in November or December and is renowned for its elephant procession, religious discourses, traditional dances and important musical performance ' Panchavadyam'. Vaikom has figured prominently in the history of Kerala as the venue of the famous Sathyagraha, staged in 1925 with the blessings of Mahatma Gandhi for the admission of the Harijans in the Temple.

This is a beautiful old temple situated in Kottayam town. The Koothambalam here is one of the best in the state and the temple has also a wealth of paintings on its walls. The main festival of the temple is 'Phalguna Utsavam' which is celebrated during March.

Built-in 355 AD on the high ranges of Kuravilangad town, this church has an old bell, which bears an un-deciphered inscription. 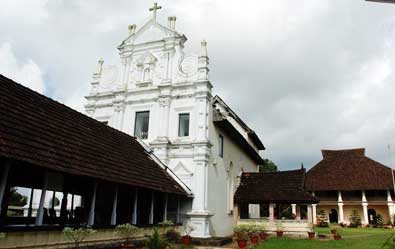 2 km from Kottayam town, situated in Thazhathangadi these are two churches dedicated to St. Mary which were built in 1515 AD and 1579 AD respectively. The Valiapalli is well known for its Persian Cross and Pahalavi inscriptions on it. The Cheriyapalli house some of the most exquisite murals and paintings, depicting biblical and other themes.