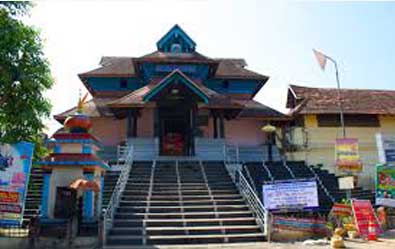 The Parthasarathi Temple, dedicated to Sree Krishna, on the banks of the holy River Pamba, attractions large crowds of devotees. The famous Aranmula snake boat race is held on the last day of the week long Onam festival. The 'Vijinana Kalavedi" at Aranmula imparts training in the traditional arts like 'Kathakali', classical dances, classical music as well as 'Kalaripayattu'. Foreign tourists stay here for long periods to get a first-hand knowledge of the culture of Kerala. The Parthasarathi Temple here also has fine murals from the 18th century. Aranmula is also very famous for its handmade mirrors of polished metal called ' Aranmula Kannadi', which is a unique craft and not found anywhere else in the world.

An important religious convention of the Hindus is held at Cherukole on the banks of River Pamba, usually in Feb every year.

The Akadamanitta Devi Temple is famous for the ten long 'Padayani' performances held in connection with the annual festival in April - May. 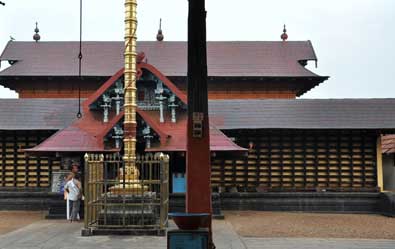 5kms east of Thiruvalla, situated on the banks of the River Manimala, Kaviyoor is famous for its temples. The Kaviyoor Temple and the rock-cut temple nearby are of great archaeological importance. The Hanuman Temple stands on a small hillock and is built in the gable style architecture. The stone figures here are considered to be the earliest specimen of stone sculpture in Kerala.

The water of the 'Chilanthikinar' well in the premises of this temple is believed to cure skin diseases.

Situated on the banks of the River Pamba, Kozhencherry is well known for the religious Maramon Convention held annually in Feb-March, which is the biggest gathering of Christians in Asia. People of all communities attend it, as religious thinkers and Christian scholars from across the world address the convention.

8 km from Pathanamthitta, the goddess at the Bhagavathy temple here, is believed to grant boons to devotees and help them realize their dreams. The Temples has beautiful wall paintings and artistic stone carvings.

Mar Ignatius Elias III, the hold patriot of Anthiod, while on a visit to India, died at this place in 1932. His mortal remains are preserved at this church, as later this place developed into a pilgrim center. The annual festival, Ormaperunnal is held in February.

The old Shiva Temple on the Pamba Pathanamthitta road is an important place of worship. The estate of the Farming Corporation and Ecumenical Centre of the Christians are located here.

7 km from Thiruvalla at Niranam is the oldest Christian Church in India, believed to be built by St. Thomas in 52 AD

14 km from Chengannur railway station, Pandalam, as a holy town is perhaps second to Sabarimala. Sree Ayyappa, the presiding deity of Sabarimala had his human sojourn here, as the son of Raja of Pandalam. The Valiyakoikal Temple near the palace, on the banks of River Achenkovil, has been modeled on the Sabarimala Shrine. Pilgrims usually stop here to worship, before proceeding to Sabarimala. Three days prior to the Makaravilaku festival, the sacred ornaments of Sree Ayyappa are taken in a procession from Pandalam to Sabarimala.

10 km from Thiruvalla, the Ormaperunal (commemoration day) of Mar Gregorios Metropolitan, the declared saint of Malankara Orthodox Church, is celebrated on the first and second of November. 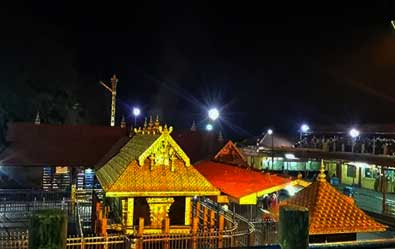 One of the most famous pilgrim centers in India, Sabarimala is situated on the mountain ranges of the Western Ghats, at an altitude of 914 m above sea level and is accessible only by foot, from Pamba (4kms). The hold shrine dedicated to Lord Ayyappa attracts thousands of pilgrims from all over India, from different castes, creed, especially from other parts of South India. Mandalapooja and Makaravilakku are the two main events of the pilgrim season, which is from Nov to mid-Jan. The Temple remains closed during the rest of the year, except for the first five days of every Malayalam month and during 'Vishu' in April. Sabarimala is surrounded by hazardous hills like Karimala and Neelimala. Men of all ages are allowed inside the temple but women only below 10 years and above 50 years of age are permitted inside.

This is the headquarters of the Malankara Marthoma Syrian Church. The Paliakara Church here has some exquisite mural paintings. The SreeVallabha Temple in Thiruvalla is perhaps the only one in Kerala, where Kathakali is performed as a ritual offering every day.