Ernakulam or Cochin/Kochi, the commercial and IT hub of Kerala, is fast –growing modern city where shopping malls, theatre complexes, industrial buildings, amusement parks, marine drive, etc are located. It is also known as Queen of the Arabian Sea….

Ernakulam district, located on the coast of the Arabian Sea, is a cluster of islands networked by lagoons and backwaters. Kochi, one of the finest natural harbors in the world, was once a major center of commerce and trade with the Arabs, Chinese, Portuguese, Dutch and the British. All these foreign traders have left their mark on this beautiful island. Half the fun of visiting Kochi is moving around on the local ferries. A conducted cruise through the winding waterways will take you to several quaint spots.

Ernakulam, the palm-green commercial town of Kerala is one of the finest natural harbors in the world from where ships set sail for foreign ports with different products of Kerala, like seafood, pepper, rubber, and coir. Across the bridge into the old city, there are bastions and streets built by the Portuguese over 500 years ago. It was here in St. Francis Church that the body of Vasco Da Gama was originally buried. The enormous fishing nets on the seafront of Cochin provide a charming view.

Because of its nearness to the sea, the climate of Ernakulam is tropical. This also gives Ernakulam a very pleasant weather round the year. The average maximum temperature can go up to 36.°C in the summer months and to a minimum of 18.0°C in winter. Monsoon comes to Ernakulam in the month of May and remains there until November.

May to September is the best season to visit Ernakulam. From May it is monsoon season.

Air: Ernakulam district is linked by direct air services with its own airport at Cochin

Rail: Ernakulam junction and Ernakulam town stations are connected by rail with the nearby important cities.

Road: A good network of road connects Ernakulam with the major towns and cities of the country.

Some of the sightseeing places in and around Ernakulam/Kochi are mentioned below: 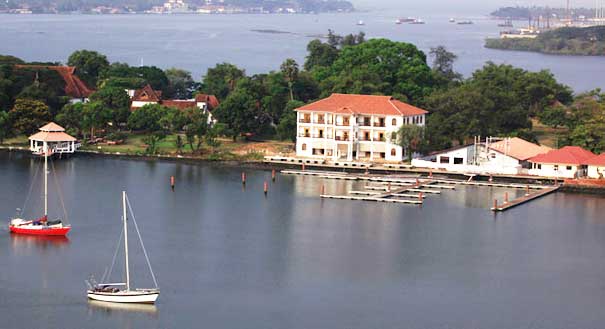 This long narrow palm-fringed island is easily accessible from the mainland and is where you’ll need to go to see the Bolghatty Palace.

Situated on Bolghatty Island, the Palace was built by the Dutch in 1744 and later became the seat of the British Resident. Today this

has been converted into a hotel and is a popular place to stay.

Kerala village with paddy fields and coconut groves nearby is an added attraction. It is a popular tourist destination, especially among foreigners. 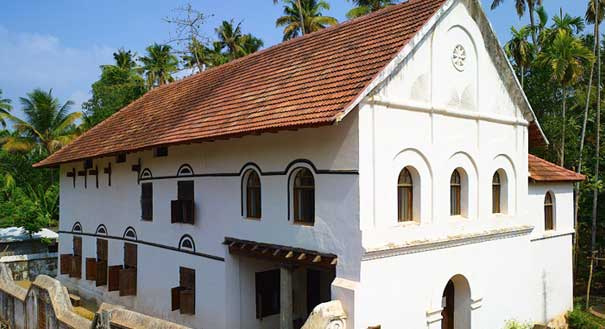 About 4km from North Paravur, this place houses the oldest synagogue in Kerala. There is also a Jesuit Church and ruins of a Jesuit College. One can also walk to the Hindu Temple overlooking river Periyar, a 16th-century mosque, as well as burial grounds.

The Chinese fishing nets that line the sea-front and exhibit a mechanical method of catching fish by local fishermen in Fort Kochi are said to have been brought from by traders of Kubalai Khans Court, many years ago and are still used today at high tide. 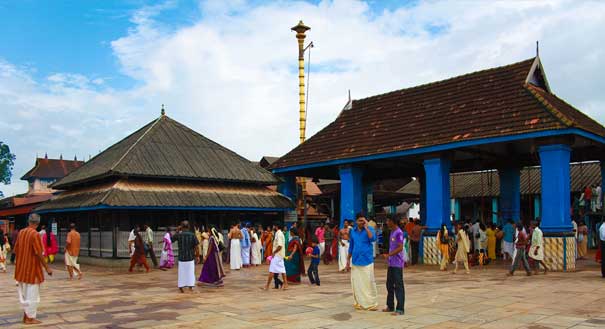 Numerous stories attest to the early history of this 10th-century temple, where tormented devotees found solace in the diety, Bhagavathi. Today it remains one of the most popular pilgrim sites in Kerala, devotees still flock here seeking liberation from torment. Sometimes they dance themselves into a frenzy in their battle between the demons and the deities. The Goddess at Chottanikkara is revered here in three forms; she is Saraswathi (goddess of learning) in the morning, Bhagavathi (divine mother)at noon and Durga (fierce and destructive ) in the evening. 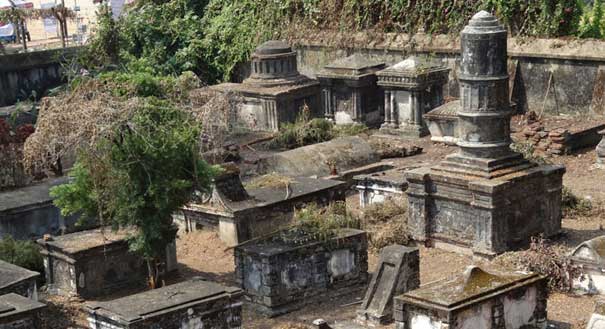 Located a short distance from St. Francis Church, near the entrance to the beach, this cemetry is supposedly maintained by the CSI, but is very badly kept. It is of historical importance, having many famous persons buried here. Most of the gravestones have been removed, but the few that are here are in fairly good condition. However, because of the overgrowth of plants and shrubs, it takes a bit of real exploring to discover whose gravestone is whose.

Located in the heart of the busy Mattancherry is the Coonan Kurishu Shrine which was the venue for about 25,000 Syrian Christians who, in 1653, assembled at the ancient cross in Mattancherry and tied long ropes to it. Pulling the ropes they took a solemn oath that they would never obey the Latin Archbishops or be under the Jesuits.

Other Attractions in Kochi 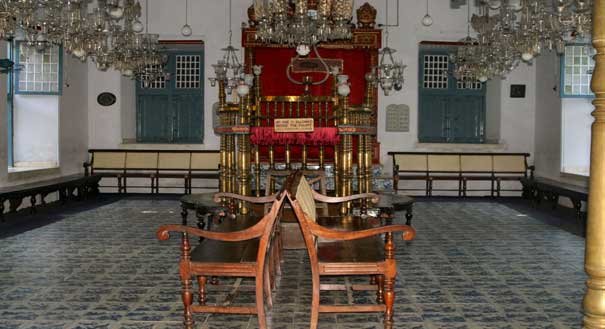 Otherwise known as the Paradeshi Synagogue, it was built in 1568 AD. The Great Scrolls of the Old Testament, the copper plates in which the grants of privilege made by the Cochin rulers were recorded and the exquisite Chinese hand-painted tiles are of interest here.

One of the oldest synagogues in the world, it is a jewel of incomparable beauty with its brass columns, Belgian hanging lamps, and exquisitely hand-painted, blue-and-white Chinese porcelain tiles of which no two are alike. It is open from 10.00 hrs to 12.00 hrs and 15.00 hrs to 17.00 hrs and is closed on Sundays and Jewish holidays.

Founded in 1503, this Portuguese fort is now in ruins. With its European heritage, its air of genteel decay, and stubborn self-absorption, it is a place where history still stalks the lonely streets and one can see the remains of Indo-European architecture that still exist here.

Easily the best part of the city, the beach at Fort Kochi extends from Kamalakada to the harbor entrance. A stroll along the beach at sunset with the Chinese fishing nets and sailing ships in the background is an experience to cherish. 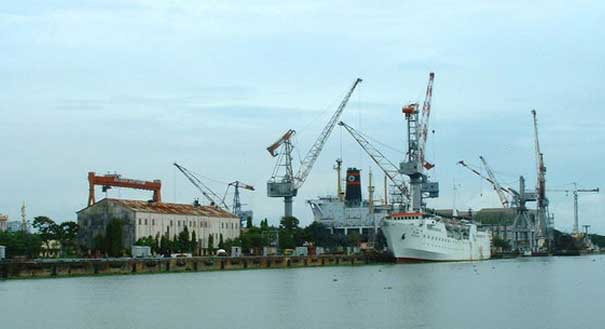 It is the biggest shipbuilding yard in and is situated in the southern part of Ernakulam on the way to Willington Island. Set up with Japanese collaboration, this shipyard has a building dock for ships up to 85,000 DWT and a repair dock that can accommodate ships up to 1,00,000 DWT. Motilal Nehru, the first oil tanker made in India, was built here.

The palace of the erstwhile Rajas of Kochi in the 19th century, this place has now been converted into a museum displaying a fine collection of articles used by the Rajas of Kochi besides many archaeological findings. It is located at Tripunithura, 6 km from the city. 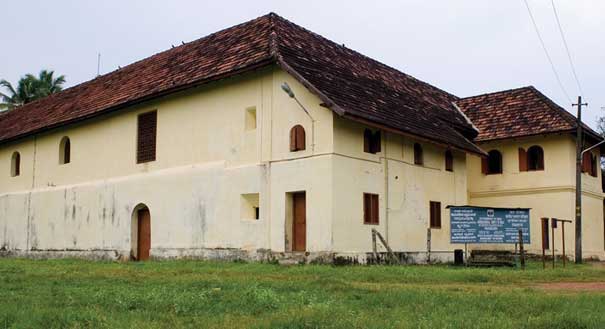 Also known as Dutch Palace, this structure was built by the Portuguese and presented to the Raja of Kochi in 1555 AD. It acquired the present name after 1663 when the Dutch carried out extensions and repairs in the palace, although they never resided here. Its interiors are decorated with murals from the Ramayana and there are some lively displays of royal costumes and palanquins. The place is open from 10.00 hrs to 17.00 hrs and is closed on Fridays and national holidays.

It was built in 1503 and is the oldest European fort in. It is located outside the city limits on the northern end of the island.

Parur or Paravur It is situated 35km north of Kochi ( Cochin ) and encapsulates the cultural and religious medley of God’s own country. There is a synagogue, a place of brahmins, a Syrian Orthodox Church, a Krishna temple, and a temple of Goddess Mookambica worth seeing here. 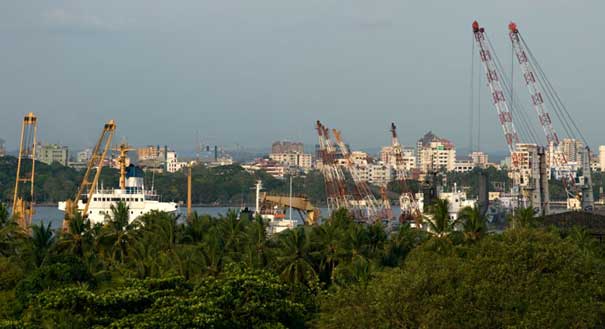 It is a man-made island created from the material dredged while deepening Kochin Port. Situated between the mainland Ernakulam and the old town Mattancherry and separated by the backwaters, Willingdon Island is an important part of Kochi. The Government of Tourist Office, the Southern Naval Command Headquarters, the Seaport, Naval Airport, Railway terminus, Customs House, Cochin Port Office etc are all located in this island.

Ferries shuttle across the narrow strait from Fort Cochin to Vypeen Island where visitors can see a lighthouse at Ochunthuruth (open from 3 to 5 pm daily), good beaches and the early 16th-century Palliport Fort (open Thursdays). Gundu, the smallest island in the harbor, is close to Vypeen. It has a coir factory making doormats from coconut fiber worth stopping at too. Chitram Art Gallery can be seen opposite Air, on M.G.Road, Ernakulam. This gallery regularly exhibits changing collections of paintings by local artists worth seeing. For more information call: 2351295. 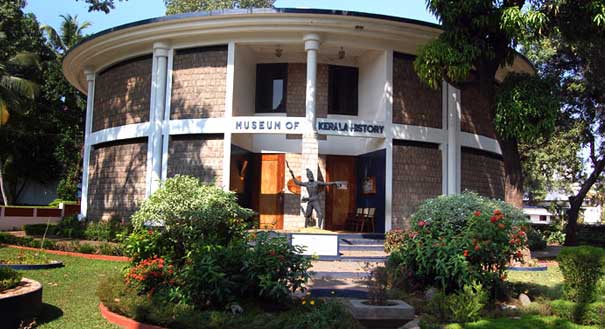 Situated at Edappally 10 km along the National highway from Ernakulam on the Always route, it presents an hour-long light and sound spectacle of life-size sculptures in concrete, together with the background music and complemented with displays of the vastness and diversity of Kerala's history over the centuries. Viewing times are from 10.00, 10.30, 11.00, 11.30 12.00, 14.00, 14.30, 15.00, 15.30, 16.00 and the place is closed on Mondays and Public holidays. Telephone:2558296 for more information. If you are traveling with children, they will thoroughly enjoy visiting this museum.