Athirapally is the land of rivers and forests and great waterfalls! The destination houses the largest waterfall in Kerala, the Athirapally Waterfall, a major tourist attraction. This patch in Sholayar ranges so beautifully intertwined with lush green forest cover and sizzling silver cascades and located central to Cochin and River Nila(Bharathapuzha), is a treat for the eyes during the monsoon. Swollen Chalakkudy river, Charpa, Vazhachal, and Athirapally are ideal places where the monsoon is to be enjoyed. 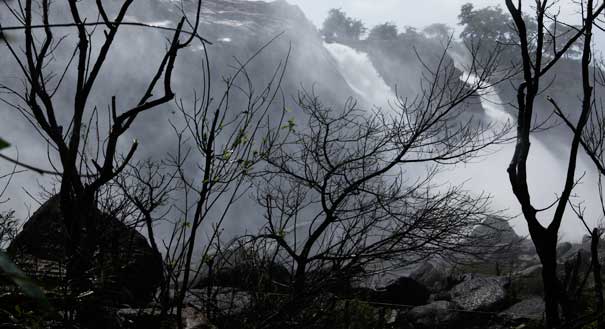 Local communities along the Chalakudy river banded together to stop the construction of a hydroelectric dam upstream from Athirapally Waterfall. The proposed dam would have submerged more than 140 hectares of forest, dried up extensive riparian areas downstream and destroyed Athirapally Waterfall, one of several scenic waterfalls important to the local tourism industry. The dam also would have destroyed the critical habitat of many important species, including the rare Cochin Forest Cane Turtle, the endangered Great Indian Hornbill, the Lion-Tailed Macaque, and the Nilgiri Langur.

The picturesque and majestic waterfalls, Athirapally and Vazhachal, two of nature’s most relaxing places, are located just five km apart, on the edge of the Sholayar forest ranges. The Athirapally falls to join the Chalakkudy river after plummeting down 80 ft. The cool spray that covers a large area near the falls makes Athirapally a scenic location. The picturesque Vazhachal waterfall is close to dense green forests and is a part of the Chalakkudy river.

has located 78 km from Kochi ( Cochin ), at the entrance to Sholayar ranges. Affording to the onlookers one of the most bewitching sights, Athirappally Falls is about 80 feet high and located in the forest area. Combined with the greenery and the soothing sounds, it infuses freshness into any tired soul and is a tranquil and much-needed escape from the troubles and stresses of life.

Perched high above in the Sholayar forest ranges, on the fringes of Kerala’s famed rainforests, the Vazhachal waterfall is wild, beautiful and unspoiled by the passing of time, and provides a restful escape for those wanting to leave the hurried pace of city life behind. Both these waterfalls are a part of the Chalakkudy river and 5 km apart on the road to the hill station Valparai, which has excellent tea estates and is one of the highest elephant density habitats and also a crucial corridor between Parambikulam and Malayattoor.

The riparian forests of the Chalakudy river have revealed the existence of a thick riparian vegetation of more than 10 meters width for a distance of 10.5 km downstream from Peringalkuth, covering an area of 58.5 hectares. Out of this, 26.4 hectares lie within the Vazachal area, including three large islands densely covered by riparian forests.

The riparian forests of the area have been found to be characterized by the presence of typical riparian species of plants, in addition to evergreen and semi-evergreen species. Out of the 319 species of flowering plants identified from the study area, 24 are endemic species of the Western Ghats and 10 are rare and endangered.

The Chalakudy river is known for its diversity, as it contains 85 species of freshwater fishes out of the 152 species known in Kerala. Among these, 35 are endemic species of the Western Ghats and nine are considered to be endangered.

Nearby Places of Interest 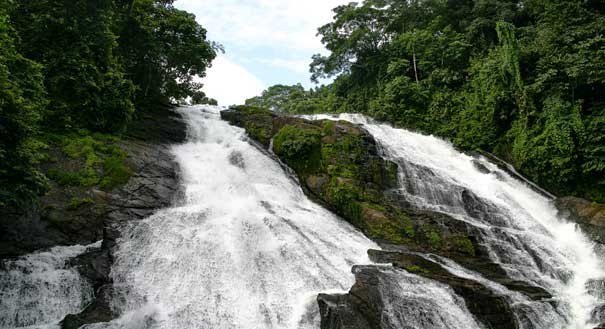 The east of Athirapally is the enchanting but lesser known Charpa falls which plunge on to the road during monsoon. It is a sight to watch and enjoy.

It is located about 20 km from Chalakudy on the Sholayar Peringalkuthu route. Anakkayam means the "Elephant pit". It is noted for a lake with cool and placid waters. The place is a forest untouched by human encroachments and is a haven for those who wish to escape from concrete jungles. It attracts the visitors with its bubbling streams, natural rock formations and flora.

For those who want a little extra recreation, there are two water theme parks nearby with plenty of adventure games and water sports.

Malakapara Tea Gardens For the adventurous, a family safari through the deep forest and high ranges ( Western Ghats ) complemented with lots of hairpin curves takes you to the fascinating sculptured beauty of Malakapara tea gardens. Along the route, if you are lucky you may end up seeing some wildlife.

Thumpurmuzhi is an ideal stopover with its garden, scenic splendor, and a classic waterfall. 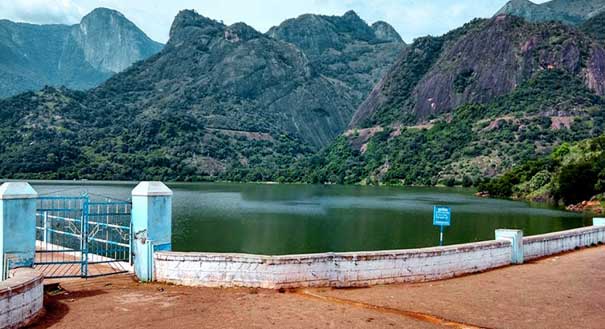 Deep in the forest on the way to Valparai are the two dams that generate hydroelectric power to the state. Entry to the dam site is with special permission only.

With the abundant flora and the even herbal plantation maintained by the forest department, Vazhachal is a botanist’s treasure trove.