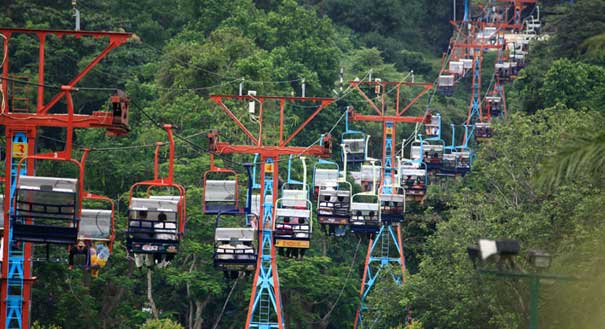 Malampuzha, a little township on the foothills of the Western Ghats, is located 10 km from Palakkad town and has in store a large number of amusement options. Being nurtured by Kerala's longest river, the Bharathappuzha, Malampuzha is blessed with lush green foliage and has been acclaimed as one of the most attractive tourist spots in the district of Palakkad, Kerala. It offers a variety of amusements with its wonderful blend of natural and man-made elements.

Topographically the district can be divided into two regions: the low land comprising the midland and the high land formed by the hilly portion. The soil is laterite in the hill and mid regions. Midland soil is thick with Coconut, Areca nut, Cashew, Pepper, Rubber and Paddy cultivation in abundance.

The district has a humid climate with a very hot season extending from March to June in the Western part of the district; whereas it is less humid in the Eastern sector. The maximum amount of rains occurs during the South West Monsoon, which sets in the 2nd week of June and extends up to September. About 75% of the annual rain is received during the south-west monsoon period. During the period from December to May, practically no rain is received. The temperature of the district ranges from 20 C to 45 C.

The language spoken by the people of the district is Malayalam, but Tamil which is next in importance is also common among the people in Chittur Taluk and Palakkad Taluk. Nearly 25 percent of the people speak Tamil and have it as their mother tongue. Konkani, Tulu, and Kannada speaking families are also occasionally seen in the district.

The nearest airport is Coimbatore, 55 km away.

To the south is Cochin Airport,160 km away.

Trivandrum International Airport is 382 km away.

Palakkad Junction Railway Station, 5 km from the city, is a major railhead of the Southern Railways

Palakkad is connected by good motorable roads to all the major towns of Kerala and neighboring Tamil Nadu. There are long-distance 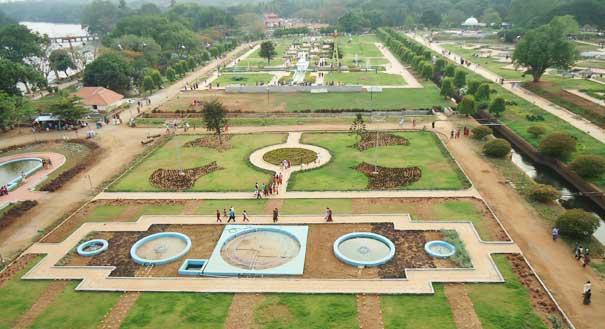 The Malampuzha Garden known as the Vrindavan of Kerala exudes the charm and harmony of nature with a perfect synchronization of the grandeur of the mountains blending with the serenity of rivers. The lush green lawns, innumerable flower beds, glittering pools, fountains and avenues spur the rosiness of one's mind.

The reservoir offers amusement facilities for boating and fishing. The Garden House has a unit of water sports. Pedalboats, rowboats, water scooters and motorboats can be hired from 10.00 -18.00 hrs. The well-maintained swimming pool is closed on Tuesdays.

A fish shaped freshwater aquarium, a snake park and a children's park with a toy train, await to amuse and delight the children.

The Road Train for amusement ride on wheels takes one through the vast expanse of the Malampuzha Garden and its vicinity.

A small garden constructed in the Japanese style gives a touch of exotic charm to the landscape. So does the hanging bridge across the river.

The Passenger ropeway, the first of its kind in South India, offers an adventurous and delightful air journey of 20 minutes across the gardens, giving a soul-stirring view of the gardens and the distant hills that kiss the heavens and the blue strip of the reservoir.

The telescopic tower in the garden provides a terrestrial view of up to 40 miles.

This is a marvelous and astounding work of art created by years of hard work by several laborers, using only embroidery color threads without the aid of needles or any special devices. The Thread Garden has an abundant collection of charming life-like models of plants and flowers exquisitely arranged and housed in a large indoor glass chamber built very close to Fantasy Park. 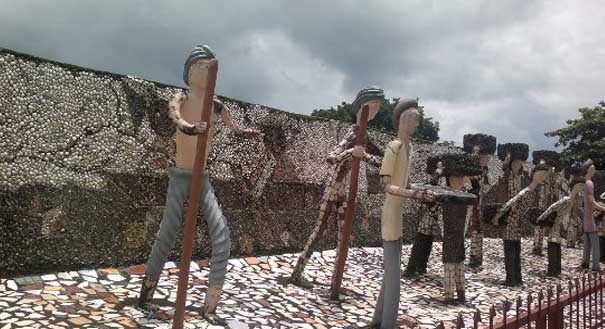 The first rock garden that emerged from the Master creator Padmashree Nek Chand of Chandigarh, in South India is at Malampuzha. The most interesting feature in the making of this wonderful garden is that the whole place is made of unwanted and broken pieces of bangles, tiles, used plastic cans, tins, and other waste materials.

Another item of interest in the park is the imposing concrete sculpture of yakshi, done by the renowned Kanai Kunhiraman. This noted sculptor Kanayi Kunhiraman has been awarded the Raja Ravi Varma Puraskaram for the year 2005, instituted by the State Government for Malayali artists for their contributions to painting and sculpture. 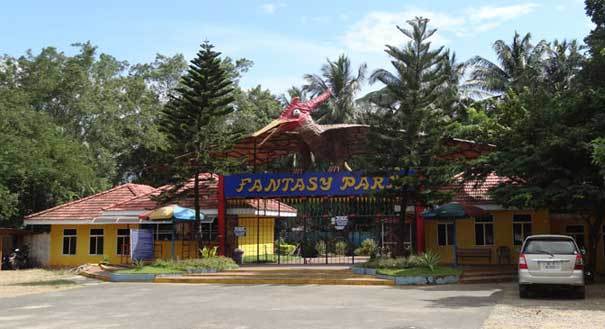 The Fantasy Park at Malampuzha is modeled after Appu Ghar of Delhi and Essel World of Bombay and is the first amusement Park of Kerala. The Park has thrilling rides over 8 acres of beautiful landscape with gardens and fountains. There are a hygienic restaurant and ice cream parlor within the park. The water merry-go-round, striking car, paratrooper, pirate boat, dragon coaster, Tora Tora, mini tele combat, jumping horse, scooter ride, caterpillar, etc are a few among the entertainment options at this fun world.

The park is located in the enchanting backdrop of the mountain ranges of Malampuzha with the majestic mountain peaks of the Western Ghats overlooking it. The park, developed by Neo-Tech Amusements and Resorts (P) Ltd bagged the award for "Best Innovative Tourism Product in the State - 1998" instituted by Kerala Tourism. The park is said to entertain on an average one thousand visitors a day.