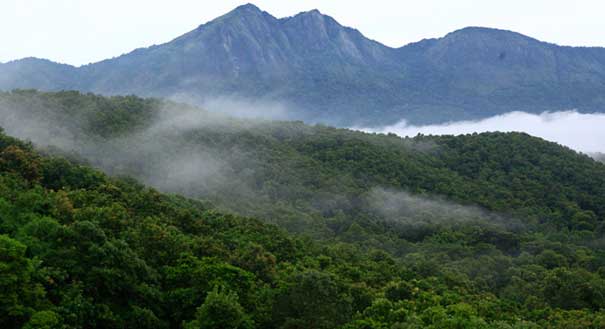 Silent Valley national park situated near Palakkad, with its rich biodiversity, is rated as one of the seven wonders of India and has been a popular eco spot among nature enthusiasts. Covering a core green zone of 236.74 sq. km, the destination forms part of the Nilgiri International Biosphere Reserve, with the UNESCO giving it the ‘Western Ghats World Heritage Site’ title.

Plans for a hydroelectric project that threatened the park’s high diversity of wildlife stimulated an Environmentalist Social Movement in the 1970s called Save Silent Valley which subsequently resulted in a cancellation of the project and creation of the park in 1980.

The original name is said to have been ‘Sairandhrivanam’ in local parlance meaning Sairandhri's Forest. As per a prevailing Hindu legend, Panchali or Draupadi, the polyandrous wife of the five Pandava kings, disguised herself as queen Sudeshna's maid Sairandhri, while they were staying in exile. Myth has it that the Pandava brothers, deprived of their kingdom, set out on a thirteen-year Silent Valley national dark exile. It’s believed that they wandered down south, into what is now Kerala, until one day they came upon a magical valley where rolling grasslands met wooded ravines, a deep green river bubbled its course through the impenetrable forest, where at dawn and twilight the tiger and elephant would drink together at the water's edge, where all was harmonious and man unknown. The Pandavas along with their wife are said to have camped beside the river, in a cave on a hill slope.

Going by documented records, British botanist Robert Wight had done an investigation of the watersheds in this area way back in 1847. Later on the British named the area Silent Valley because of a perceived absence of the noisy Cicadas usually found in dense forests. Another story attributes the name to the anglicization of Sairandhri.

‘Save Silent Valley’ was a social movement initiated in 1973, aimed at the protecting the evergreen tropical reserve forest of Silent Valley, to save the prime biosphere from being flooded by a hydroelectric project.

Silent Valley national park The Kerala State Electricity Board (KSEB) had decided to implement the Silent Valley Hydro-Electric Project (SVHEP) centered on a dam across the Kunthipuzha River in 1973. Following KSEB’s announcement of its plan to begin dam construction, a lot of trees were felled in the area around that time. The area thus became the focal point of ‘Save Silent Valley’, triggering India's fiercest environmental debate of the decade. The main concern was about the endangered species, the lion-tailed macaque, which brought public attention involving environmentalists, writers and activists from other states to raise campaigns against the issue.

In 1977 the Kerala Forest Research Institute carried out an ecological impact study of the Silent Valley area and proposed that the area is declared a Biosphere Reserve. Eventually, in 1979 the Kerala Government passed a legislation regarding the Silent Valley Protection Area (under Protection of Ecological balance Act of 1979) and issued a notification declaring the exclusion of the Hydroelectric Project Area from the proposed National Park.

Kerala Sasthra Sahithya Parishath (KSSP) effectively aroused public opinion on Silent Valley national park the requirement to save the destination, publishing assessment report on the project. Poet-activist Sugathakumari played a pivotal role in the silent valley protest and her poem ‘Marathinu Stuthi’ (Ode to a Tree) became a symbol for the protest from the intellectual community and was the opening song/prayer of most of the ‘save the Silent Valley’ campaign meetings. A writ petition was filed before Kerala High Court, against the clear-cutting of forests in the Hydroelectric Project area and the Court followed it up by passing an order to stop tree felling. Eminent personalities who visited the place and staged their protest against the hydroelectric project include ornithologist Dr. Salim Ali, agricultural scientist Dr. M.S. Swaminathan, writers and others. Dr. Swaminathan had suggested that the Valley be made into a national rainforest biosphere reserve to prevent gene erosion.

Silent Valley gets copious amounts of rainfall during the monsoons, but the Silent Valley national park actual amount varies within the region due to its varied topography. In general, the rainfall is higher at higher altitude and decreases from the west to east due to the rain shadow effect. Eighty percent of the rainfall occurs during the south-west monsoon between June and September. It also receives a significant amount of rainfall during the north-east monsoon between October and November. The mean annual temperature is 20.2 °C. The hottest months are April and May when the mean temperature is 23 °C and the coolest months are January and February when the mean temperature is 18o C.

Silent Valley is home to some of the country’s sparse indigenous tribal colonies. Among the tribal settlements, the Irulas, Mudugars, and Kurumbars abound in Attappady and nearby areas. 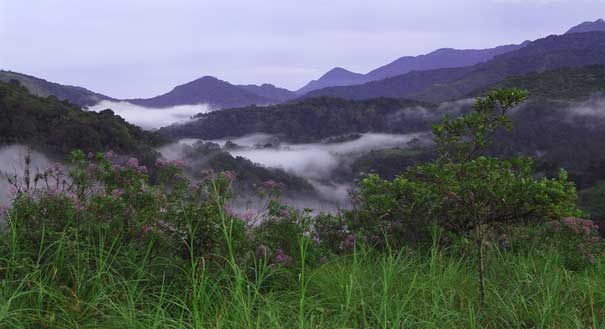 Hundreds of species of butterflies and moths besides some twenty-five rare species of frogs are also found here.

The flora of the Valley includes about nearly 1000 species of flowering plants, 108species of orchids, 100 ferns and fern allies, 200 liverworts, 75 lichens and about 200 algae. A majority of these plants are endemic to the Western Ghats.

Vehicular transport is allowed only up to Mukkali, nearly 24 km from the Park. The rest of the way has to be covered on foot up to the source of the river Kunthipuzha which flows through the valley before merging into the River Nila of Bharathapuzha, the longest in Kerala and considered to be the life force of the state.

‘Only An Axe Away’ is a well-researched documentary film on the struggle to preserve Silent Valley. The film reflects the anxiety of the people of Kerala about the future of the National Park. It’s up to the citizens from varied walks of life to put in their concerted efforts to preserve the environment in all its biodiversity and ensure that the rich ecozone remains intact for the benefit of the future generations.